You Are So Loved

Its time for my final project from the Inside Out Inner Child kit...I'm sort of sad to see this kit go.

Its been amazing for me to get back in touch with that little scamp...I'm a very serious person who has a very difficult time joking around about myself, so this month's projects have been freeing and touching and have kept me smiling from ear to ear!

For the final project, I wanted to remind that little one that no matter what, she is so loved...loved beyond reason, loved no matter what.

You can check out all the details over on the Inside Out blog today.

Not long ago, I re-discovered a box of photos of me when I was a child. I have been thoroughly enjoying rediscovering these shots of me...and the memories that go along with them.

These two spoke to me...spoke to what I feel like my inner child would look like if she could manifest herself for real.

The Authentique paper with hearts is just so much fun!  And I love the striped paper as a background. I used some journaling cards and a couple of the die cuts to get a bit of layering done to frame the photos.

I used the Faber Castell brush pen to freehand some border lines for dimension and color. 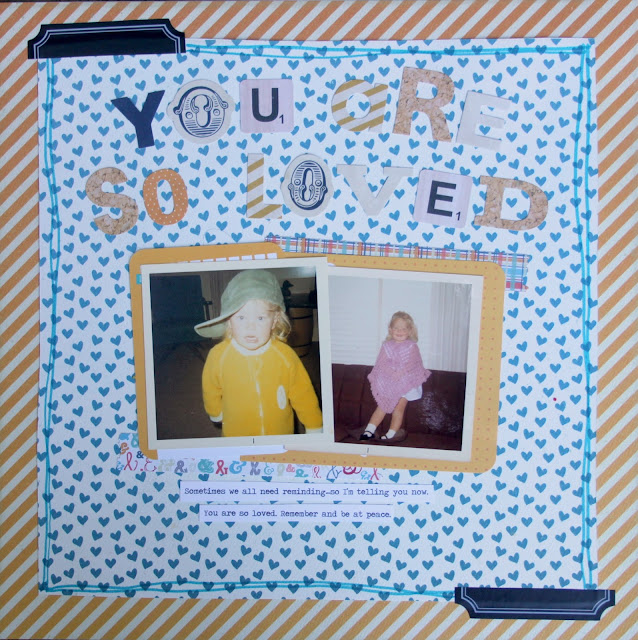 The Fancy Pants mixed alphas are perfectly playful for a title like this. It makes me think of the newpaper / magazine cut out pictures I used to make when I was a kid. 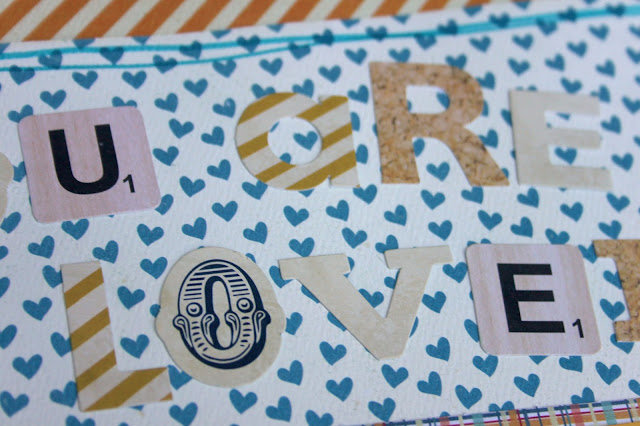 As is my habit, I cut of the chalkboard label into to pieces to add to both the top and bottom and provide some grounding. for the rest. 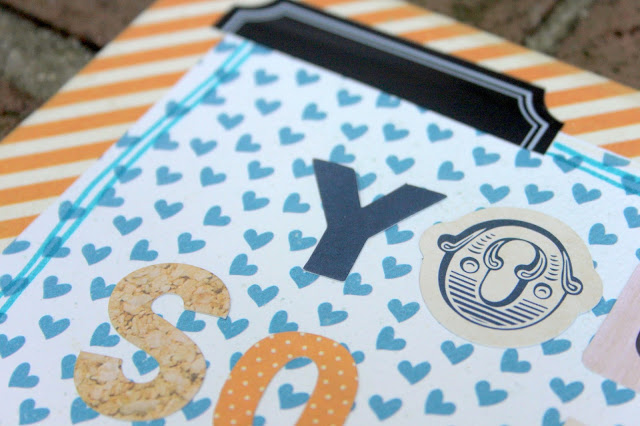 My journaling is a simple reminder to myself...you are loved. Be at peace.

As a final project, this is probably my favorite. It definitely speaks to my heart.

This time I'm tackling my ever present dream of being a ballerina.

You can see the whole story behind the art over on the Inside Out blog today: 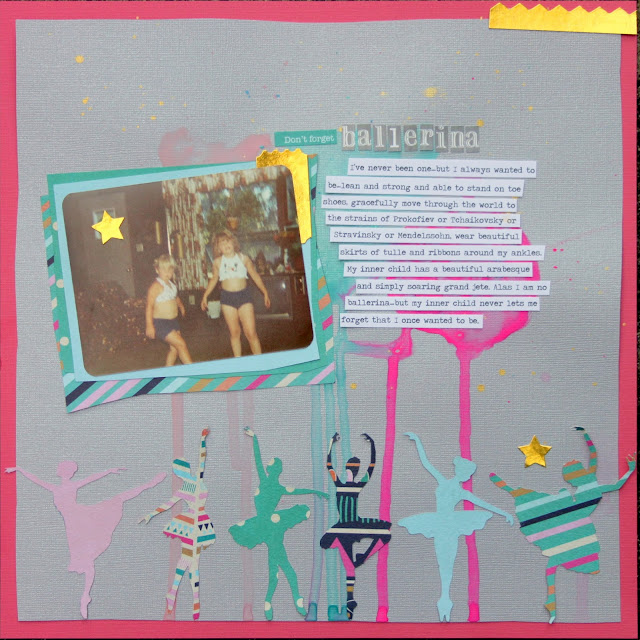 If you are attending a retreat of any kind, games are part of the fun.

Since I attend a retreat once per year (at least) and also many crops a year, I have seen my fair share of games.

Some of the fun ones:

Bingo...there are a ton of Bingo Card generators on line that you can use to make your own. The one I personally found the easiest is called Bingo Baker...you can try it out here:  https://bingobaker.com/view/505824.

Who's Got the Bear (or dolphin, or doll, or elf, or monkey or whatever you have handy). In this game, the leader must first set a timer for some random amount of time. We used a kitchen timer. A very large and very purple bear (this game works best if the toy is QUITE visible to everyone in the room!)  is earned when a task is complete...say, completing a scrapbook layout. You keep the toy until somebody else completes a task and then they take it from you. You win if you are the holder of the toy when the timer goes off.

Who's Got A...This game is just one where the leader calls out a random object that might be found in a purse, pocket or scrap bag.  First to the front wins.

Yankee Swap...this has a ton of variations, but essentially, everyone brings a gift (legit, not funny) of a certain value, cleverly wrapped so as to entice. Numbers are drawn and each person in turn can either take a gift from the collection or steal from somebody else. if you lose your gift, you in turn can do the same. Some of the variations could be unwrapping the gift on your turn rather than at the end,  a gift can only be stolen X number of times, and allowing the last person to choose to swap again after all gifts are unwrapped.

This time, I've arranged for several games that I've seen played in my kids' classrooms of all things...

First up, the How Many game...For us, there are three jars included - one washi, one buttons and one brads...we have to guess how many there are. The number is tucked inside an envelope. Closest without going over wins... 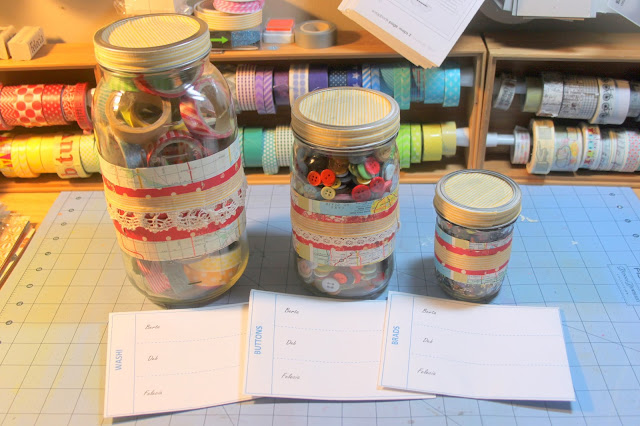 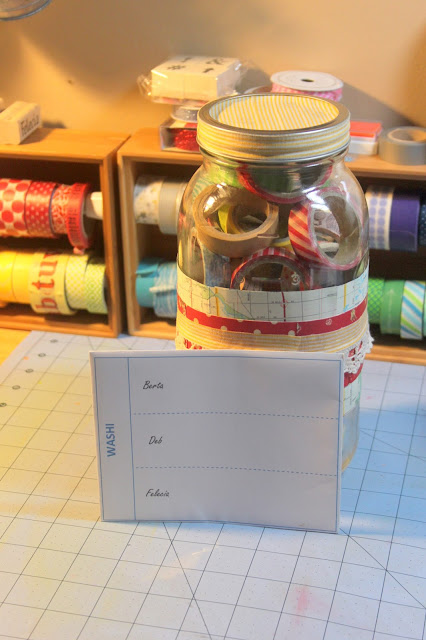 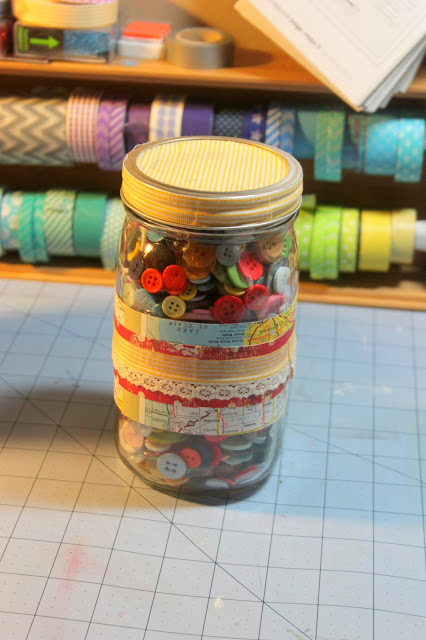 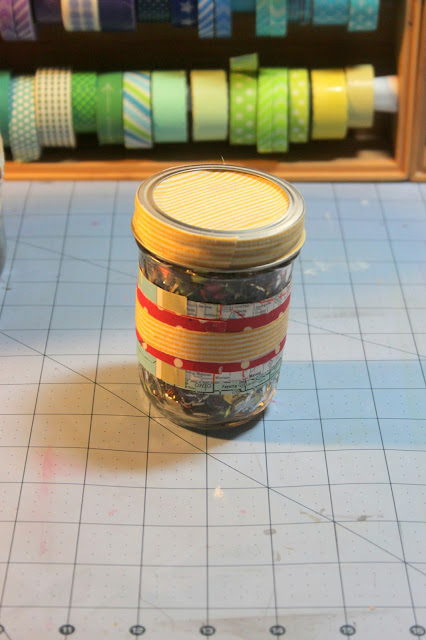 Second is the Chocolate Scramble - this is a game that gets played at showers. There are a ton of examples out there. I searched for one that was printable that looked fun. Its just different names of chocolate treats that are scrambled and need to be unscrambled.

Next is How Well Do You Know Me? Again, there are a ton of variations of this game. I made up my own with fun questions like "What is her middle name?" and "Favorite musician?".

Finally, we will be unwrapping this gift...don't be fooled. Its much smaller than it looks. It is gift-wrapped I-don't-know-how-many-times...I do know I ran out of two rolls of wrapping paper to get it wrapped...its got like four or five or six or seven kinds of wrapping paper....the last one to unwrap the REAL thing WINS...and its a doozy too!! 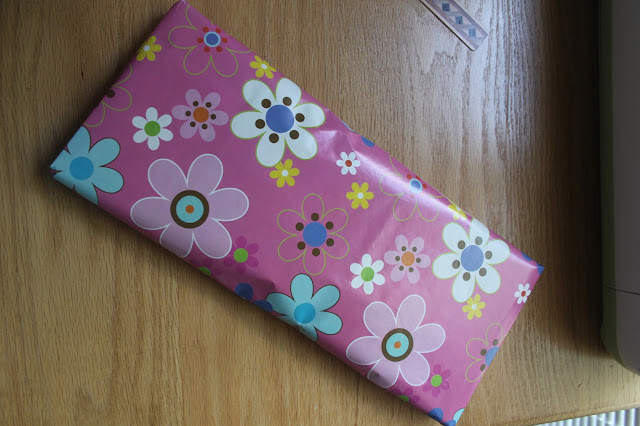 Posted by chksngr at 3:00 AM No comments:

My friends and I out retreating for the weekend...a lovely mountain retreat with great food and outdoor time, great friends and, of course, paper crafting!!!

For this retreat, I really wanted do some great swag bags...

Every retreat I've ever been to has swag or gift bags for the guests. I think a lot of retreat hosts are trying to provide a LOT of swag instead of trying to provide QUALITY swag. I also think sponsors sometimes go to the stock they can't sell as give away items so retreaters get leftover product that nobody else wanted...generous, but not necessarily desirable.

So, for this retreat, I was looking for new things that were fun, useful and also top notch. I happen to have been able to get everything reasonably priced in my own way...this is how it all played out: 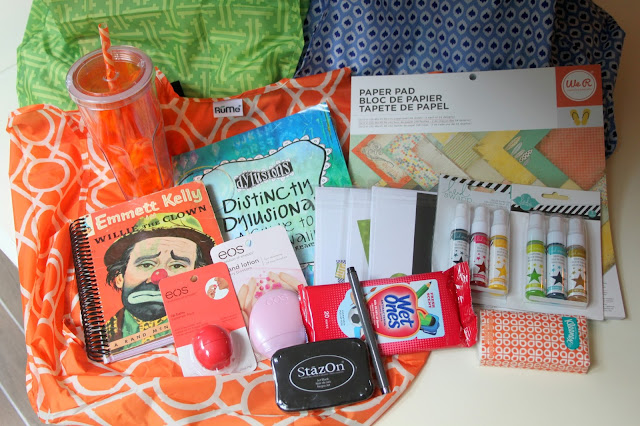 First, the bags are Rume Classic totes in the large size...If you've never seen these before, they are amazing. They hold up to 50 pounds, are washable, and they fold up into a little tiny roll so you can throw it in any bag as a spare for coming back - essential for retreat shopping!!!

The bags are in different colors, according to their recipient.

Each bag has a 12 x 12 paper pad included. The paper pads are also chosen based upon the recipient. 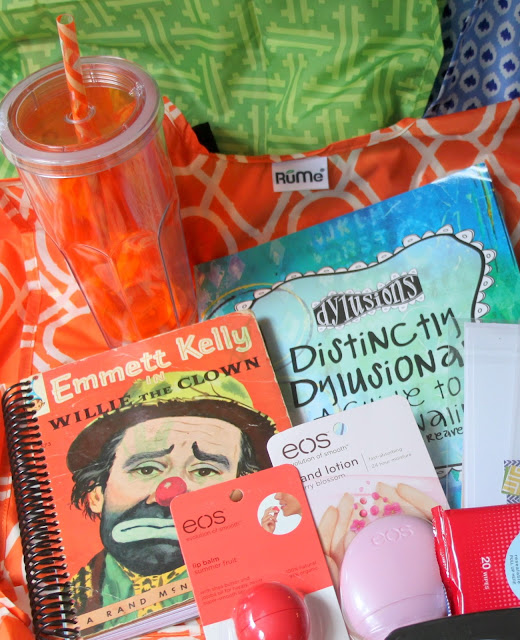 There is a color-coordinating drink cup included in each bag. These are Aladdin Aqua To-Go.

I found an amazing company called Ex Libris Anonymous that hand makes journals from vintage books. Each recipient got a journal with a cover that associated to one of their hobbies or interests. Every journal I got was beautiful! There are tons of choices and the customer service is excellent!

I also included a craft book...for this bag, it happens to be the Dylusions Distinctly Dylusional by Dyan Reaveley. 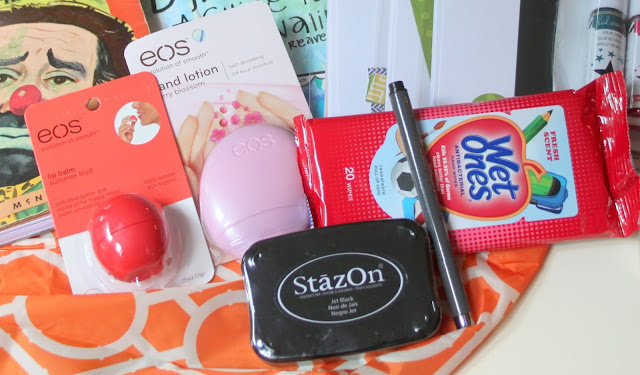 There is an EOS lip balm and an EOS hand lotion. Each bag has scents that are specific for the bag recipient. I got these at Target on one of my regular Target runs!

There is a StazOn ink pad and fine line black pen.

Kind of hidden in the background there are three custom card kits I made as make-n-takes. 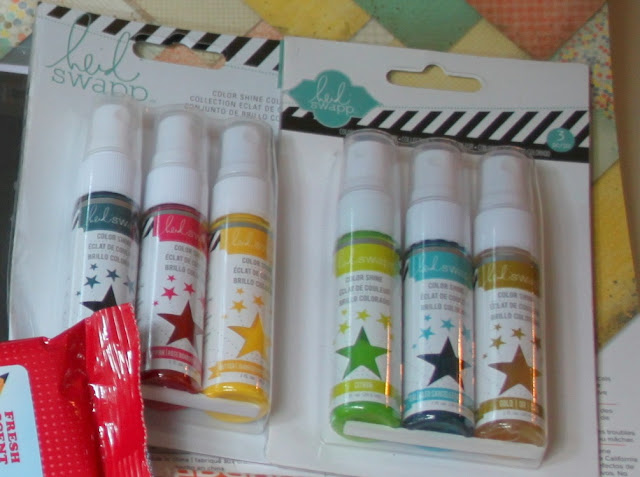 What you don't see here are the "treats." I included some nuts and a Kind bar for each bag as well.

There you have it...my kind of scrapbook retreat swag bag.

I'll post some more on our games...so stay tuned!!!

Posted by chksngr at 3:01 AM No comments:

As I worked with the amazing Inner Child kit from Inside Out, I realized I probably owe my inner child an apology for shushing her all the time...

And I kind of wondered if I'm the only person who does that... 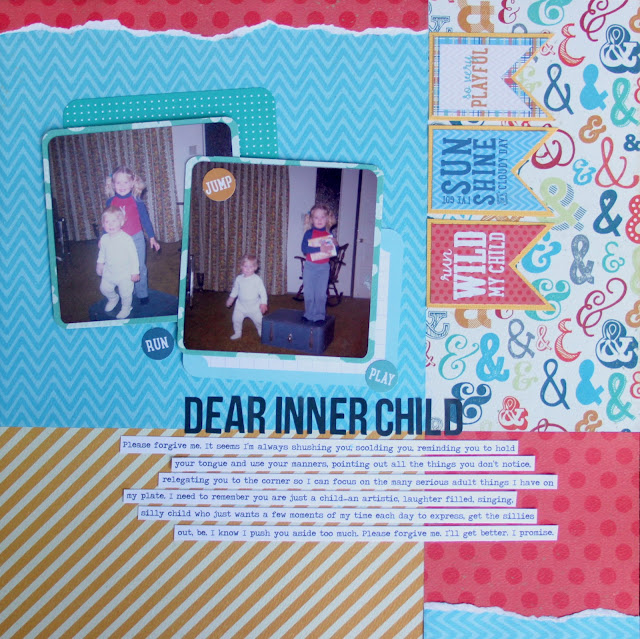 I'm over on the Inside Out Blog today Sharing the story behind the art...head on over and read the whole story!

Posted by chksngr at 3:01 AM No comments:

I am SO in love with this new Inner Child Kit from Inside Out.  Its absolutely in my sweet spot both colors and theme....

My first project is a picture-less paper piecing project featured over on the Inside Out Blog today... 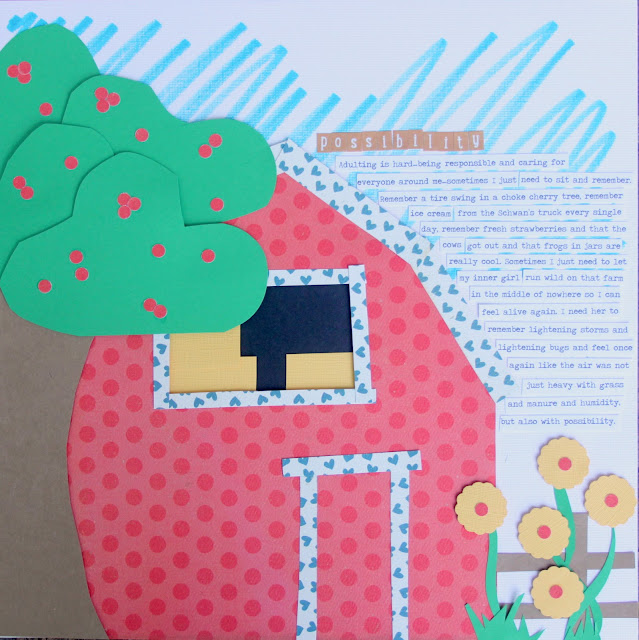 Head on over and take a look!

Inner Child - the latest from Inside Out

There si a beautiful new kit out TODAY from Inside Out...its called Inner Child. 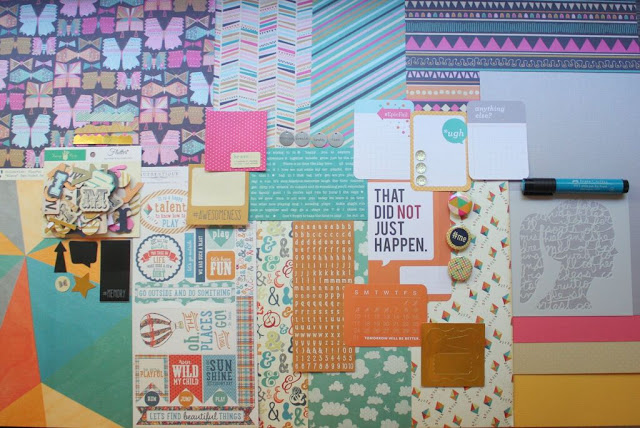 Its is just amazing, with papers from Fancy Pants Designs Flutter line and Authentique's Playful line.

There are some amazing cardstocks from My Minds Eye and tons of fun embellishments to explore with. 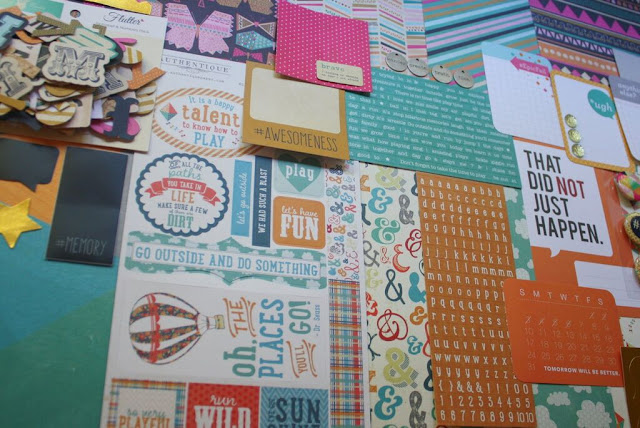 I had an absolutely amazing time creating with this one...

So get yours HERE, then come on over to the Members Exclusive Page on Facebook and play along with our Inner Child challenges this month!!!