From Sketch to Layout (twice)

Sketch's are my most favorite scrapbooking tool.

I get them EVERYWHERE and have a habit of pinning them to my Sketches to Follow Pinterest Board.

For this layout, I started with a sketch from Allison Davis' Sketch Support blog. I like her sketches because she includes cut measurements for each piece if you are inclined to follow the sketch exactly. You can see the original sketch post (and download the printable sketch for yourself) HERE:

The first layout I did was swinging pictures (very OLD pictures) of Jayden's first swing in a car swing in Grandma's backyard: 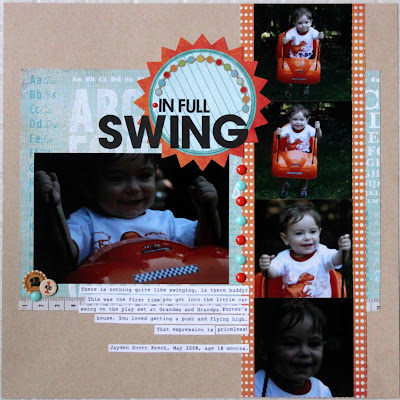 The second layout was essentially a copy...for Noah. He's QUITE a different boy and his layout reflected his diffference...but close enough for us to have similar pages in their books: 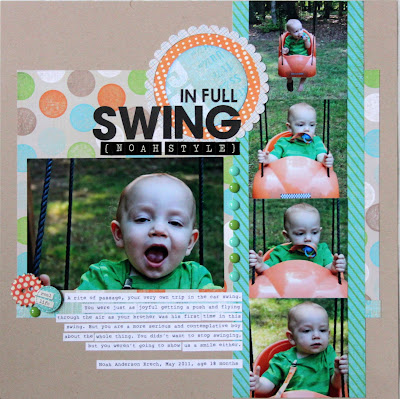 This double layout thing is something I find myself doing often...its not so much that I want to have matching layouts in their books as that I find myself with very similar photos (and I'm so far behind that I can do them at once!)

do you use sketches? How do you store yours? Where do you get them?  I would love to know if you use them and if you have a method for keeping them all together.

this is a test post for my new blog feeder.
Posted by chksngr at 10:39 AM No comments:

I can't even begin to tell you when I experienced my first movie theater movie.

I know Jayden's first movie was Princess and the Frog at the dollar theaters. I took an afternoon off and Jay and I had a "date." Note to self: need to scrapbook THAT also...but where, oh, where are the pictures!!?!?

As a movie, it is a perfect little boy movie - filled with mysterious but not TOOO scary villians, a bad guy who turns into a hero, funny little guys doing funny little things, and , of course, a fart gun...little boys think that is hysterical.

Since my kids would sit rock still for popcorn and a drink at home, the whole movie thing was a total win for us as a family outing. And the matinee makes it not such a blow to my wallet.

I scrapped this at lightening speed, since I had already been dabbling with a layout of hex frames and cut-outs.

My inspiration layout was published by  The Cricut Design Team in their project center: 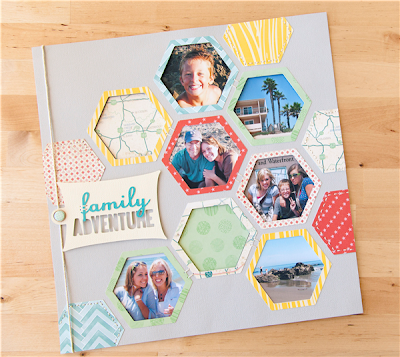 Cute, right?  BUT...I missed the cut-off to get the cut files for free. When I compared the file content and its price with getting complete digital cartridges, I just could't justify the cost.

So, instead I purchased a digital kit that contained the hex pattern (plus a whole bunch of other images I'll use later!) and sat down to figure out the right measurements. Thankfully, I can still do measurement math and it all worked out.

Here is my take: 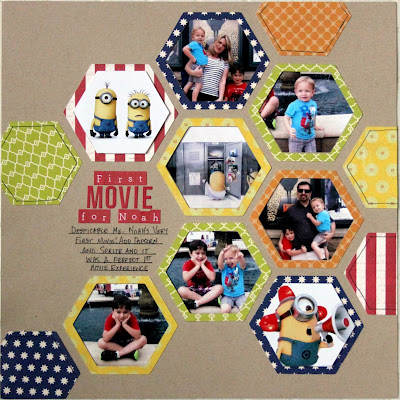 As you can see, a very close copy. I used slightly brighter colors, all from my scrap bin, and then did my journaling by hand without using the tag from the original layout.

Not a lot of dimension or embellishment, because of the pattern paper mix and the over/under use of the hex layout, I didn't do much beyond some stickers for the title and then penning some lines around the solid hex's to mimic the sewing on the original. Its very flat...something I think my scrapbooks might thank me for later!

I loved experimenting with my cricut...I've got plans to do some more cutting like this - a pattern or background image...But that is for another post!

I looked at my blog the other day and I was so…disappointed…I guess that is the right word.

You see, I’ve had an identity crisis of sorts.

I was working so hard to be PUBLISHED or on a DESIGN TEAM…and I lost my focus and…well…around Christmas, it all felt so forced and not fun.

So I took an unscheduled leave of absence from blogging.

I needed some time to figure out WHY I do what I do, to dabble a bit in some things OUT of the spotlight of my blog and get my focus back.

So…today I’m restarting…perhaps with fewer posts a week. I’m thinking maybe two or three vs. the 5 or 6 I used to do.

I also took some time to take a class or two, go on a scrapbook trip, and figure out what it is I’m really trying to accomplish as an artist…who I am as an artist….

Who I am as an artist...well…I figured out what I WASN’T as an artist very very fast, through my experimental break.

I am not a put-lots-of-products on one page artist. Using huge clusters of products led me to design delimas I couldn’t get over. For me the art is not in how many clusters and layers and dimension I can put on my page. It is about the story and my feelings and my less than adequate pictures…which leads me to…

I am NOT about perfect pictures. Are you kidding me? I am lucky I get ANY pictures of my kids and husband that are not filled with fake horrible smiles and random weird posing. If I can capture the moment and there is not some cheesy-faced photo-bomb included, I’m a happy girl. If they turn out to be clear shots, well composed and well lit, it’s a TOTAL BONUS!

I’m not about a single picture in the middle kind of girl. I cram many many photos on my pages and I like it that way.

My 11th commandment is “Thou shalt not use glitter on thy projects.” Its not IN me…I abandoned my 80’s glam in the 90’s. Plus its SOOOOO MESSY! so…there ya go.

I stamp very very little and I never emboss…see the comments on the glitter…too messy.

I’m not about the hottest lines. Ok. That is a total lie. I LOVE the new stuff…I keep track of it .I can tell you manufacturers by touching the paper and looking at the colors. And I LOVE new stuff…but I’m curbing my enthusiasm for buying ALL of the latest new things and trying for just a FEW of them.

I’m not mixed media…Ok, that is kind of a lie too. I AM mixed media in the sense that I have been exploring gellatos, water colors, stencils, ink, and different mediums. However, you aren’t going to see a ton of mixed media layers, and all that beautiful work that most mixed media artist use. First of all, I don’t have the patience for it and second of all…well…it can be messy…do you see a trend here with the messy?

Sooo….now that I have climbed the mountain and gotten my “enlightenment” I’m ready again to do some sharing and posting…

Next up, some layouts I've been hoarding that have are filled with pictures, older products and fun stuff...oh, and I'm totally going to stash-bust some where in this process. I think I'll do a "fast" but I gotta  time that right.

Because 7 months is long enough...