Before there were boys and scrapbooking design teams and North Carolina, I used this blog to explore spiritual themes in my life – scriptures that moved me,  songs I was working on and the life struggles of maturing and not seeing my dream life at the end of my tunnel.

It was very cathartic for me.

Sometimes I have moments where I wish I was using this blog that way all of the time…and then other times I know it would be weird to bare that much of my soul to people I don’t really know.

I am, tho, committed to being transparent…I find honesty and transparency in shockingly short supply in our world. And I’m not interested in painting the “always great” picture that blogs often paint. I know if I was stuck someplace in my life, reading about how everyone’s life was perfect would just send me over the edge.

So…today, a bit of transparency and using my blog to work  out…well…grief is I guess the proper word for it, but its not the right word.

On Saturday night/Sunday morning, my uncle Jerry died. He was the 4th of 5 brothers, the third to pass away.  Now only my own father and the uncle I knew and continue to know the best are left of a family that once had seven people in it.  Herein is the beginning of my grief.

But not for me. Not in the least for me. Which sounds cold and weird and somehow unkind.

You see, I haven’t seen nor spoken with this uncle in over 15 years. It seems strange to put that in black and white. Since the last time I saw this uncle,  I have divorced, remarried, moved across the country and had two children. An entire lifetime has passed since I last set eyes on his face.

That is where this all feels a bit off. My uncle was a gregarious salesman, a person who seemed to love engaging others in conversation. I learned just this morning that he was forced to take tap dancing lessons as a child and that he had an illness that caused his bones to be brittle. I know he had had two families. One I was well involved with that included the person I know as an aunt and a cousin I thought was the cutest little boy to ever walk the earth. The other was with a woman he remained partners with until his death, and with whom he had three daughters – cousins I would not meet until I was an adult and they were all either teenagers or nearly there.

But much of his life was enshrouded in secrecy. He kept much of his life fiercely encapsulated and, as far as I can tell, the parts did not bleed into one another. There is much about this blood relative, whom I should know more about, should have known better, that I know of only from rumors and conversations with other people, along with old stories my dad and uncles told upon those rare occasions we were together.

There are many who will say – and perhaps rightly – that I should have worked harder to maintain a relationship. But over time, I’ve grown an aversion to those who so fiercely guard secret lives. Beyond some point the distance of time alone can estrange two people and when one is so fierce about their secrets, it further drives wedges where there should be relationship.

So…that is why my grief is not really for me…my grief is for my own father, for my remaining uncle, for this man’s ex-wife, his partner, his children and his grandchildren. Where once there were five brothers, only two remain. Where once there was a partner, father, and grandfather, only memory is left. Its is with sadness that I think about their future without this person in their lives. They knew him. And loved him. And will now not have him on this earth.

It is odd, to me, that death brings about the coming together of family. It is sad that we allow relationships and friendships to decay to the ravages of time, the spear of hurt feelings, the slow, smoldering destruction of unacknowledged wrongs done in ancient times.  We get so wrapped up in our pride and our own goings on that we forget we are but one passenger on this train and that the train is FILLED with others looking for the reassuring touch of another soul.

And so, I guess there is a bit of grief for me in that. A fellow soujourner has moved beyond my reach, beyond the point at which I can share the journey.

When I am faced with an hour or two of free time, do I do the work? Or…do I photograph and blog? What a decision.

It hit me pretty hard about two months ago that my oldest child would be heading to kindergarten this coming fall – what with lotteries and registration and all, it became an event I couldn’t ignore. He’s going to REAL school.

One thing about all the school pictures and school papers that paralyzes me has been considering what to do with all that paper while still trying to preserve the memories and stories related to school. My child has already been to 4 years of preschool and we have tons of papers built up. What happens when he’s 18? YIPES!

And then there is the fact that I have not one, but TWO boys to do this for. I really wanted something the same/similar for Noah.

So, I have been on the prowl for solutions to my problem, ideally getting 14 years of school into a single album with some meaningful record of the events of each year, a record of the cherished/dreaded school pictures (hard to scrap, these pictures!) and maybe a sampling of the work from each year.

In my searches, I’ve come across lots of options from Project Life to pre-made albums to yearly mini albums.

It’s no secret that I’m a fan of sketches. I use them for almost every single layout I do. I thought, SURELY one of my sketch resources would have an option for me…and I found JUST what I needed on Valerie Salmon’s Got Sketch blog.

They have a really amazing downloadable workshop called Ultimate School Album. Its AMAZING and flexible and has made the production of school albums for my boys super easy and enjoyable. In addition to the page sketches, there are printables to track your child’s favorites, friends, and handwriting  and some printable embellishments and other goodies.

There is a recommended supply list that uses the DCWV Grade School Paper Stack: 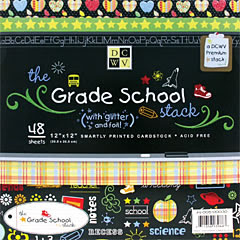 and the Brights Cardstock Stack. 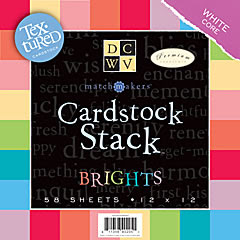 Honestly, I felt those were a little too feminine for my rough and tumble boys…plus I wanted a blue/orange/yellow/red sort of color scheme.

After tossing around a number of paper lines and combos of paper lines, I decided to use American Craft Chap and some of the papers from Echo Park’s A Boy’s Life plus raid my scrap bin to create custom little additions: 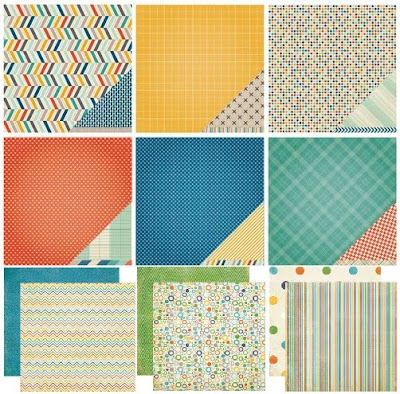 I decided to do two of each layout, exactly the same and put them into American Crafts Modern Albums. Basically two identical albums to be filled as we hit the right years in school. Here is what I’ve accomplished so far…the white you see is matting for eventual photos. 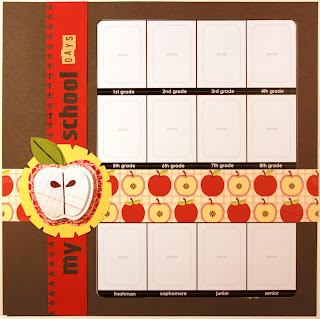 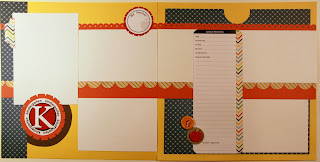 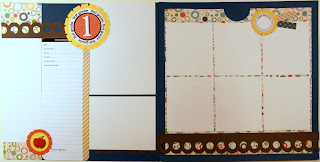 Oh, and just in case you are interested in doing your own version , I saw on the Got Sketch? blog that they were offering the Ultimate School Album at 40% off until June 10th. How awesome is that!?!?!?