Its not really a surprise that I like scrapbooking tools.

Its true, I've purchased my fair share of expensive tools...a Cricut (and 12 cartridges to date), edge and shape punches, a crop-o-dile, a bind-it-all, etc.

I'm sort of an Alton Brown when it comes to buying tools for my scrap studio, tho.  Everything has to multi-task. Circle punches = good. Sail boat punch = not on your life.(I'm still up in the air about a rock-ship punch, because technically I can cut a small rocket ship with my Cricut! And while I've purchased some butterfly punches, as a woman who scraps mostly boys, I tend to second guess that purchase to this day.) Even the shape cartridges I've purchased for my Cricut have undergone significant scrutiny before purchase.

You would be hard pressed to find a tool in my stash that ONLY made brads, or ONLY made tags, or ONLY attached things using those very weird clothing-style plastic attachments. Its just not practical enough for me.

Being a Cricut girl, I'm not often swayed to longing for other cutters. But I was wooed by the Slice. It was so very very portable...and I liked the thought of taking it with me somewhere to use. Even with my longing, I could never get my head around plunking down the $$$ for a Slice (and its shape cartridges) when I had a perfectly awesome (though, not so portable) Cricut at home.

Then I got an unexpected blessing.

Some time ago, during one of the CHA shows, the Making Memories blog ran a give away for a SLICE plus this amazing hands-free kit. 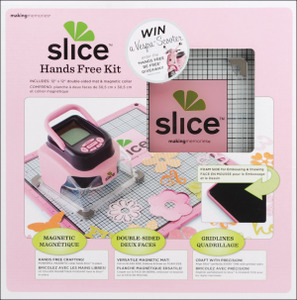 In terms of a free give away on a blog I followed anyway, it all seemed sort of no-harm, no-foul. So, I put in my comment not expecting to receive anything but the inspiration that the blog already gave me.

Much to my disbelief, I WON...(I like to tell people I never win anything. But to be honest, I do win things and it always seems to be just the RIGHT thing when it happens.)

When I got it, I eagerly ripped open the packaging and followed all the instructions to the letter...and couldn't get the thing to work right. My images kept getting a cut right down the middle as the machine moved back to its "starting" position after a cut.

Well, being the customer service person that I am (this IS, after all, something that I do as part of my own job!) I proceeded to seek their assistance on getting the machine to work properly.

After many tries and lots of trading emails, I finally got frustrated and thought it might be best to put the cute little pink thing aside in my studio.

I went back to being a Cricut-only girl. Which, ok, seriously...I'm not a scrapper who goes off to lots of away events. Even my monthly scrapbooking group meets in MY home, so the whole idea of being in love with the portability of the Slice was not applicable to my lifestyle. It was just my delusional coveting that made me long for the thing.

But it didn't stop me from being disappointed in my little pink machine sitting off in the corner of my studio, when I had the time to think about it.

Fast forward QUITE a long time to last month. I was in the process of cleaning out my studio and getting rid of machinery and products I didn't want, need or use. And here sat my not-working Slice. I honestly wasn't sure what to do with it.

So, in one sort of hail-mary email to the Customer Service department at Making Memories, I explained the lengthy process I'd gone through to try to get my little pink cutter to work.

They asked for details and, well, because I'm THAT way, I sent them the whole email chain that I had saved off to one of my folders for my records. They asked me to ship them the machine to see if they could fix it for me.

And a week later a BRAND NEW ELITE arrived on my desk. (not just fixed, but UPGRADED!) 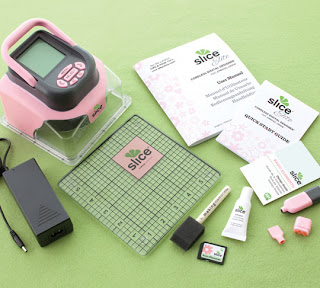 Of course, I went straight to work again, trying out some new things. I've only got three cards for it, so its not like I've got a huge library to work with. But I've been messing with sizes, figuring out how to place it on the paper to get the shape to appear where I want, learning about the features.

AND, Making Memories is running this amazing sale until June 1 in their On Line Shop. Being the savvy (cheap) shopper that I am, I took advantage and bought 4 more shape cards plus a binder to put them all in.

And now, I've been playing...I'll post some results after I get this thing figured out!

Tell me, what unexpected blessing have you received lately? Or how are you playing right now?  Or what spectacular purchase have you made recently???

Posted by chksngr at 4:02 PM No comments: 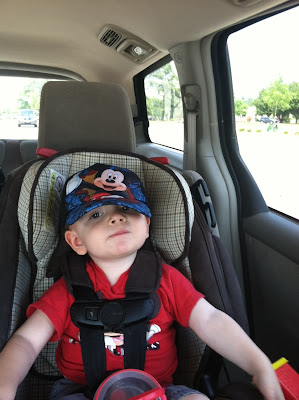 Our Two-year old,  as you can imagine, is gaining words in leaps and bounds. Some days it feels like he’s added a whole new dictionary.

Since his brother talks non-stop, he’s determined to add his two bits to the conversation. You can imagine the insanely busy airwaves in our home with all this talking going on. Honestly, its a bit maddening.

The best part of this stage is that Boa can now keep up his end of any conversation in which he happens to find himself and perhaps even hold up BOTH ends of the conversation if it happens to be with one of his less verbal peers.

On top of that, he’s particularly funny, saying many of his trade-mark phrases with a coy little grin and his head cocked in mischief.

I may beeee messsss – normally follows a playing spree where much has been taken out and not much has been put away…or a coloring session with markers.

I a NAKET boy! – Little man has learned to take off his pants and socks and occasionally is successful with his shirt. He will often get as “naket” as he can and then present himself before you, announcing in all his pride that his is “naket.”

Sure, mommy! Sure! – now, this one is used to answer me when I ask him to do something, like put away his toys. But he is also in the habit of using this when he wants an affirmative answer to a question, like he's coaching you. For example: Boa have Cannneeee??? SURE, mommy! SURE!

Yes?  Yes? – another tactic used by the little one when he wants an affirmative answer to a question. For example: “Boa wat Monkey George? Yes? Yes?”
Monkey George – Curious George. For some reason, this comes out clear as a bell AND with a southern accent – jo-wer-j

Pea joe-her jewwee – Peanut butter and jelly…though, he tends to tear the sandwich apart and eat only the bread with the jelly on it.

Issoh eesee fawwww wuv! – my boy is a fan of Linda Ronstadt! Do you recognize it as “its so easy to fall in love?” This little one, similar to his brother, sings a lot. He’s been heard singing the theme song to Footloose, Backyardigans, Curious George, and many other songs. He’s quite the song bird.

Got you me bro-der in hisssss han - He's got you and me, brother...nevermind...

I say pwed weejan! – this could be the pledge of allegiance to the US flag, the Christian flag or the Bible. He has learned all three in school and can recite each and every one of them. He has been known to stop elderly grand-parent looking people in stores to recite his "pwed."

I say ABC! – This precedes recitation of his ABC’s

I see twactoes???? – He likes tractors and front loaders and dump trucks. There is a construction site just south of our house…when we get in the car, he always asks if he’s going to get to see the tractors.

Fwont Woadah – in the tractor vein, this is a front loader.

Estimator – this is actually an EXC AVATOR…another tractor…

And my personal favorite:

We went to get some fast food and play in a play area at our local Chik-fil-a. There was nobody in the restaurant, really. We were standing at the counter discussing what we might have and I looked at Boa and asked him what he wanted.

Little boy STEPPED to the COUNTER, joined his hands in front of himself, and started to shuffle his little feet, looking back and forth at the menu as though he were reading it and said:

The lady behind the counter asked him, “How many nuggets would you like?”

Of course I, the mother of this brilliant and brave toddler, stood by with my mouth hanging open, completely blown away…when did my two-year-old become capable of ordering his own meal?

Today is a very special day...its my Dad's birthday... 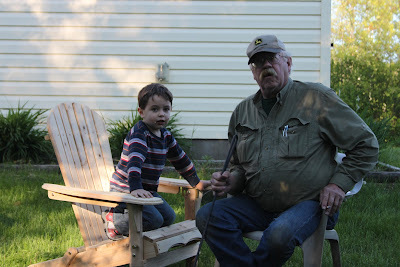 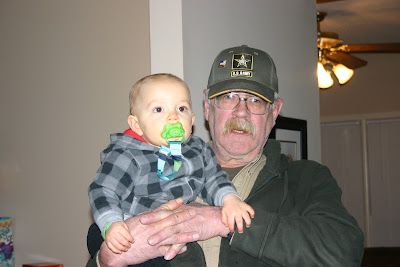 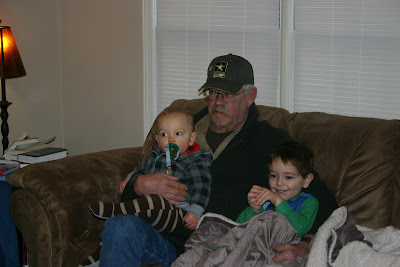 Dad, I hope you have a MAGNIFICENT Birthday!!!

Its a good thing to take a break from things...I've obviously been doing THAT!!

No real news to report in terms of where I've been...just life and busy-ness. Its one of those time in my life where a good break was needed.

I've got some new things planned for this little bloggy and I'm working on that and more on it later...

I HAVE been doing some creating and have some things to share with you.

Since its my kiddo's last day of preschool today, I've been working on teacher gifts for end of the year.

I used THIS TUTORIAL from Scrapbook's Etc. and made some gift card holders. 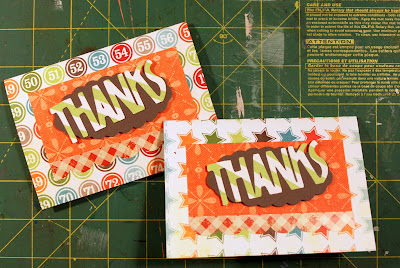 They are mostly made with My Minds Eye Lime Twist papers, but there is some Stella and Rose in there as well as some stickers from Simple Stories. 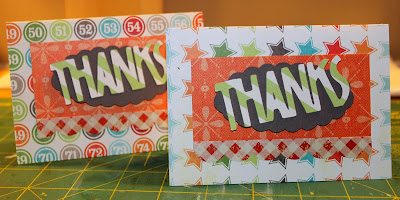 The inside has a handy little pop-up that holds the gift card. I printed messages on colored cardstock, matted them and adhered them inside each card. 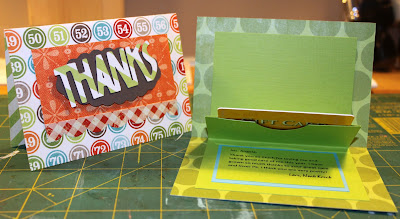 They were tied with some Jillibean Soup twine wrapped around several times before being sent in the back-packs to school.

This is definitely a project I will use again. its SO easy to make a super cute gift card holder!

I've got quite a few on my Gift Goodness Pinterest board. I'm always on the lookout for great ideas!

To every mother and surrogate mother out there...

But especially to my mother.. 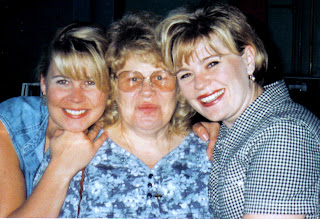 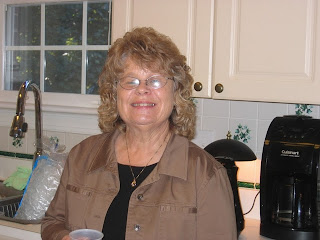 She has taught me MUCH, but the very best thing she ever taught me was how to be great at this: 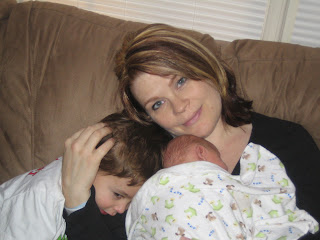 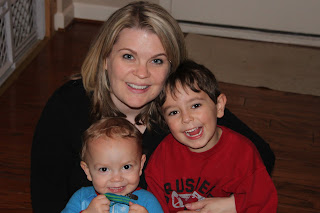