After Grandma and Grandpa left, Jay just TOOK OFF! Don’t know if it was the extra stimulation, the break in his schedule, the different things we did to open up his world or what…BUT…he is now on his hands and knees – not crawling, just rocking and toppling over…but still on his hands and knees… 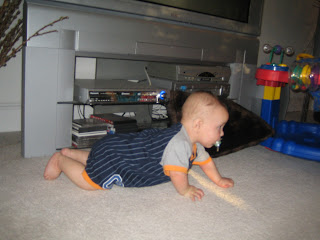 Or trying his hand at pushups…(check out those little toes!) 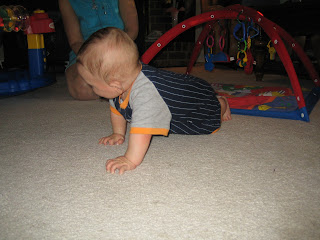 He also tried his hand at feeding himself. 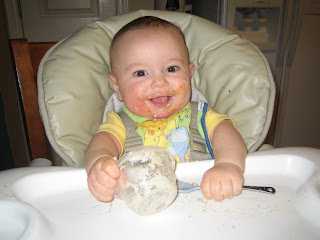 And, because oatmeal with bananas is very sticky and tends to cling for all its worth to the spoon, he actually managed to get some in his mouth. 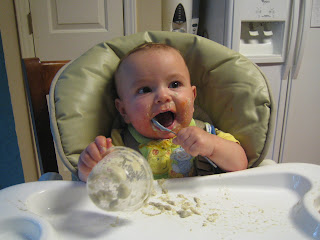 Did some scrapping…pictures of those pages to be posted later. Had a super fun time with new papers, some new Autumn Leaves stamps and some of the MANY pictures of Jay…Managed to get done a page about Jay’s first swing and the pages for when we found out he was a boy…I also did the ground work (waiting on pictures) for the day we found out we were pregnant and started a page called “FOCUS” with pictures of him totally absorbed in a toy. Not too bad for a few minutes here and there scrapbooking!!! (I usually have to do five minutes here and five minutes there interrupted by various baby activities. It’s a new way to power scrap!)

Found the COOLEST find at Costco: A 360 sheet paper pack of MME and Wild Asparagus papers. These are the papers, not the cardstocks, but they are the same designs and there are three of each. Total bargain at $13.99 – that’s less than 4 cents a sheet!!! WOO HOO!!! 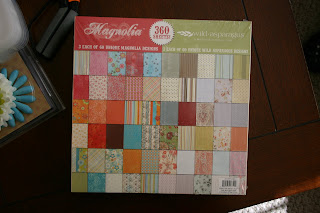 And one parting shot…feet crossed, in full control of a remote…is that a boy or what??? 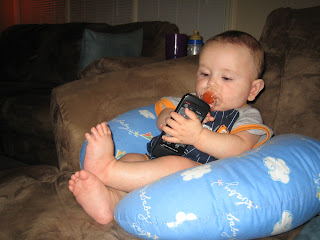 Nice post, its a really cool blog that you have here, keep up the good work, will be back.