First of all…THANK YOU to all my on-line buddies for their words of understanding and encouragement. I love the tips and the honesty. Its amazing to me how much we all share and how laying it all out brings us comfort and comraderie. We have more in common that we know, no? 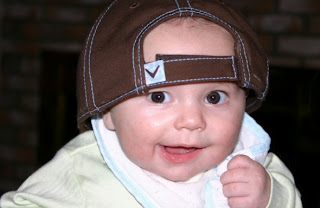 I think this means that yesterday’s game marked the first time an African American coach coached the winning team in a Super Bowl and only the third time that somebody has won in the Super Bowl as both a coach and a player…Tony Dungy played for the Pittsburgh Steelers when they won the Super Bowl in 1978. (NO, I did not have that random fact memorized…I heard the announcer say something about it, so I looked it up.)

We went to a little Super Bowl party at the in-laws…lots of delicious junk food, including home-made French bread pizzas. YUM…Unfortunately, I just wasn’t all that hungry. Fortunately, that means I didn’t eat a lot of junk..mostly veggies. Yea, me!

My adorable son REACHED for me yesterday…Daddy was holding him and he put his little arms out and leaned towards me…smart little fellow! I, of course, melted on the spot.

Speaking of my son, he rather likes football on the big screen. The colors and the movement FASCINATE him. He even got a little football from Grandpa Bob and Grandma Trudy that he clutched right to him when we gave it to him. He’s a natural! Now, we just need to work on his running game…HA! (I should start with crawling…)

My favorite Super Bowl commercial: The Blockbuster Mouse Second place: The ESL class learning how to ask for a beer in the various US dialects.

Opening entertainment – WOW!!! Really awesome…and Jay thought he was in a visual Candy Land…he even wiggled his little body to the music.

Billy Joel – ick. Love the guy SO MUCH. But he just didn’t sound good. Kudo’s to him, though for not altering the song to suit his purpose. I loved that.

Prince – mmmmm…not bad…hated the phallic guitar playing behind the curtain, tho. Let me just say – Prince, honey, lose the Tina-wanna-be dancers and the lady in the weird 70’s white outfit with wings. They do NOTHING for the show. And…well…you might want to lose the turquoise high-heeled boots too. At least when you play in the rain…I held my breath the entire ½ time show waiting for one of the four of those nuts to slip and fall.

I have virtually NOTHING to say about the game…I just wasn’t that invested. Liked the opening 92 yard return for a touchdown. Very impressive. Liked the interceptions. And really liked that the rain made for such an unpredictable game. Totally liked the idea that even professional sports players are klutzy in the rain – I felt ever so much more graceful!!!